For teams within an organization that frequently communicate with one another using Instant Messaging, it is often beneficial to apply structure around the Instant Messaging used by each team. Adding structure does not take away from the ease of use and flexibility offered by ad hoc 1-to-1 Messaging or Group Messaging, but rather provides pre-defined places where each team communicates. As people join or leave a team, this allows for a simplified process to add or remove people from the places used by a given team for communication and ensures that only the people on a given team receive their respective team's communications.

To organize a team's Instant Messaging, the concept of Spaces is used. A Space can be throught of as a physical building. Each team member that is a member of a Space has something broadly in common, for example, they work for the same organization or are located in the same geographic location. You may setup any number of Spaces in Zimbra Connect Pro and a team member can belong to any number of Spaces simultaneously.

What You Will Need

For clarity, both the person who creates a Space or Channel and the members in those Spaces and Channels will require the Zimbra Connect Pro service. This is different from the ad hoc 1-to-1 Messaging and Group Messaging features, where the participants do not require Zimbra Connect Pro.

Getting Started With Creating A Space From Your Computer

Step 3.) Click on the "New" button, then in the menu that appears, click on "New space". A Space must be created first before any Channels can be setup. 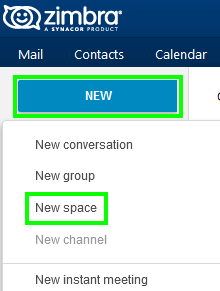 Step 4.) Enter a name that describes the Space. For example, this could be the name of the organization, a geographic region, or a building name. A topic can optionally be entered to further describe the types of Channels that can be found in this Space.

Next, in the "Add participants" field, you will need to enter a minimum of 2 or more email addresses of the people who will be team members of the Channels within this Space. The addresses entered must be colleagues within your organization. For example, if your email address is katie@example.com, the addresses entered must also end in @example.com. As you type, a pop-up will appear with a list of possible members. From this list, click on the name of the desired member. Continue to enter an unlimited number of additional members, as desired, then click the "Save" button. Team members can also be added or removed after the Space is created, but only by the person who created the Space (the Space Administrator). 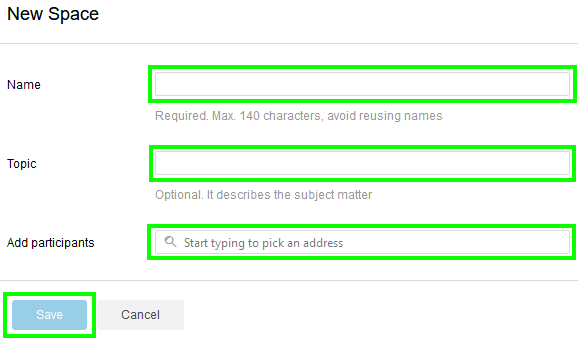 For each Space that is created, you will find them listed under the "Spaces" heading, highlighted in the first column, within the screen shot below. When a Space ("Overland Park KS") is selected, the middle column will display a list of Channels contained within the Space. The third column displays the Instant Messaging conversation. Messages can be sent by any Channel member, simply by typing in the highlighted area in the screen shot below, and pressing enter. Clicking on the smiley icon enables selecting an Emoji from a large variety of options which can then be inserted in to your message to the Channel.

Clicking the camera icon near the top right corner of the screen will result in everyone in the Channel seeing a prompt asking if they want to accept a video call. For any member in the Channel that accepts by clicking the "Answer" button (not illustrated in the screen shot), then those parties will start a group video call. Refer to the Starting A Video Call how-to article for details on the controls available during a video call.

Click the "i" information icon, as highlighted in the screen shot below.

The Space settings page now appears. If you are the Space Administrator, from this page, you can change either the Space name or the Space topic by clicking on the respective fields highlighted in the screen shot below. You can also invite additional members to the Space by clicking the "Invite into the Space" button. The Space can be deleted using the "Delete Space" button. To return to the Instant Messaging conversation, click the "< Space Info" button.

All of the current members of the Space will be listed, regardless of which Channels each member is assigned to in the Space. Each Space requires at least one Space Administrator, which by default, is the person who originally created the Space. One or more additional Administrators can be assigned by clicking the crown icon appearing next to a given member's name. Members can be removed from the Space by clicking the trash can icon appearing next to each member's name. Once removed from the Space, the member loses access to the Space, all Channels the member was assigned to in the Space, and all associated Instant Messaging conversations. If you are the only Space Administrator, and you wish to leave the Space, you must first assign at least one other Space Administrator. When completed, you will then see an option appear to leave the space. 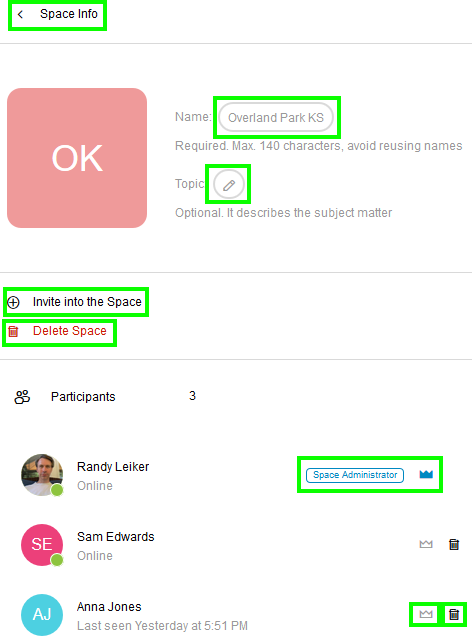 Getting Started With Creating A Channel From Your Computer

Step 1.) If one or more Spaces have not yet been created, first create a new Space. Refer to the section "Getting Started With Creating A Space From Your Computer. A Space is required before a Channel can be created. 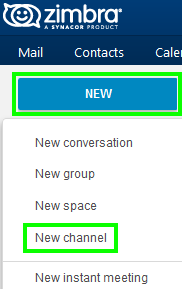 Step 3.) Enter a name that describes the Channel. For example, this could be the name of a department, a project, or a geographic region. A topic can optionally be entered to further describe the type of discussion that can be found in this Channel. A list of existing Spaces for which you are the Space Administrator will be shown. Click on the name of the Space you wish to create this Channel within. In the screen shot below, a Space called "Overland Park KS" was created earlier and would be selected. Finish by clicking the "Save" button. 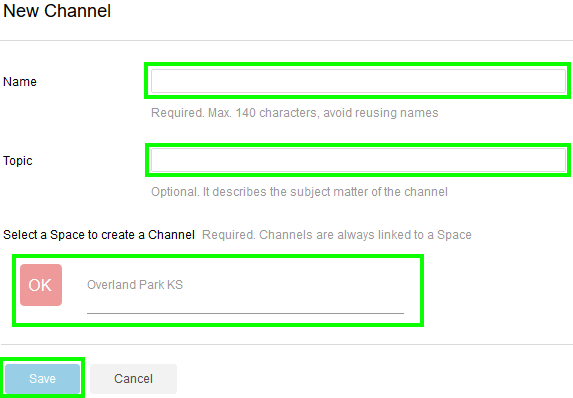 Step 4.) A new Channel is now created and you will automatically join the Channel as its first member (shown as "Customer Service" in the screen shot). Members who have previously been invited to the Space will now have the option to join this newly created Channel, in addition to other existing Channels. To join a Channel, members will need to click on the "Connect" tab, click on "Spaces" in the first column, then click on the desired Space, shown as "Overland Park..." in the screen shot. The second column will then show a list of Channels available. When a member clicks on the name of a Channel ("Customer Service" in the screen shot), the third column will then show a "Join" button that can be clicked to join the Channel as a member. A member of the Space can freely join any Channel within the Space without first requiring the approval of a Space Administrator. 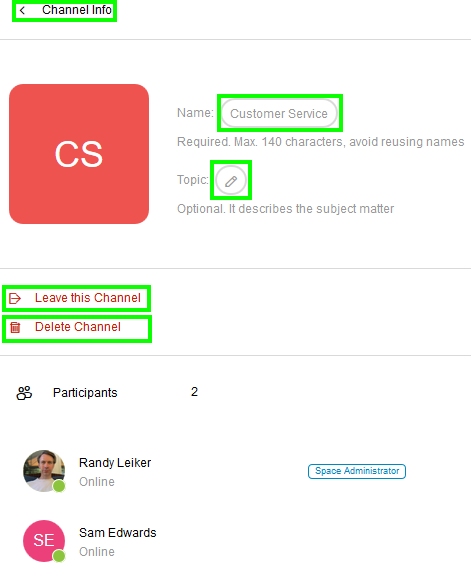 Step 7.) Clicking the camera icon near the top right corner of the screen will result in everyone in the Channel seeing a prompt asking if they want to accept a video call. For any member in the Channel that accepts by clicking the "Answer" button, then those parties will start a group video call. Refer to the Starting A Video Call how-to article for details on the controls available during a video call.

Step 1.) On your Android or Apple device, install the Zextras Team app (refer to the "What You Will Need" section at the top of this page).

Step 2.) Open the Team app on your device. You will be prompted to enter these settings, followed by tapping the "Done" button: 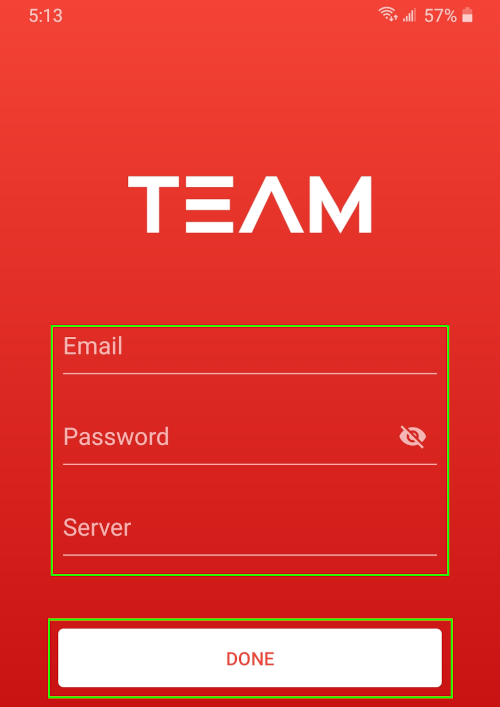 Step 3.) Select the "Spaces" tab near the top of your screen. If you do not see a "Spaces" tab on your device, this indicates that you are missing the Zimbra Connect Pro service for your account.

You will now see a list of all Spaces, which you are either a member of, or a Space Administrator of on-screen. Tap on the name of a Space to view the available Channels, then tap on the desired Channel. In the screen shot, "Overland Park KS" is the name of a Space, and both "General" and "Customer Services" are Channels.

At the time of this writing, Spaces and Channels cannot be created or deleted using the Team app, nor can members be added or removed from the Space, as they can be using the Zimbra Web Client (https://emailhosting.cloud). However, you can join or leave Channels, as well as engage in Instant Messaging conversations for any Channels in which you are a member. 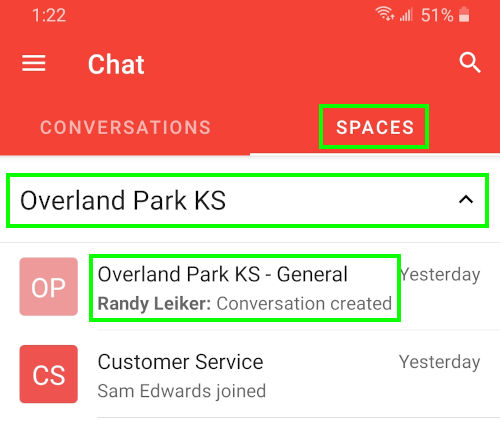 Step 4.) If you select a Channel which you are not yet a member of, you will see a button at the bottom of your screen to join the channel, as highlighted in the screen shot.

Step 5.) You will now see the Instant Messaging conversation for the selected Channel. Messages can be sent to everyone in the Channel simply by typing in the "Message" area at the bottom of the screen, then tapping the arrow icon, as highlighted in the screen shot below. 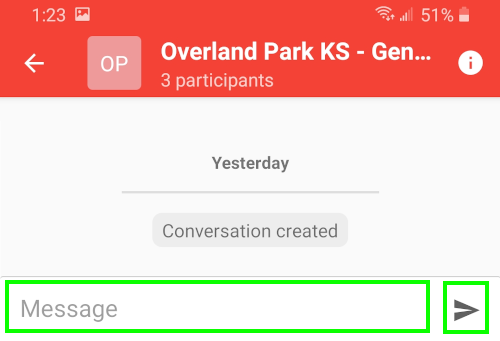 Step 6.) Every Space has a Channel called "General", in which everyone in a Space is a member. If you select the "General" Channel, then tap on the "i" information icon in the top right corner of your screen, this will display options for leaving a Space and determining if your device plays a notification sound or vibrates when a new message arrives in the "General" Channel. You will also see a list of all channels within the Space. If you leave a Space, you will lose access to the Space, Channels, and all associated Instant Messaging conversations to which you were previously a member. When finished, tap the arrow in the upper left corner of your screen to return to the Channel's Instant Messaging conversation. 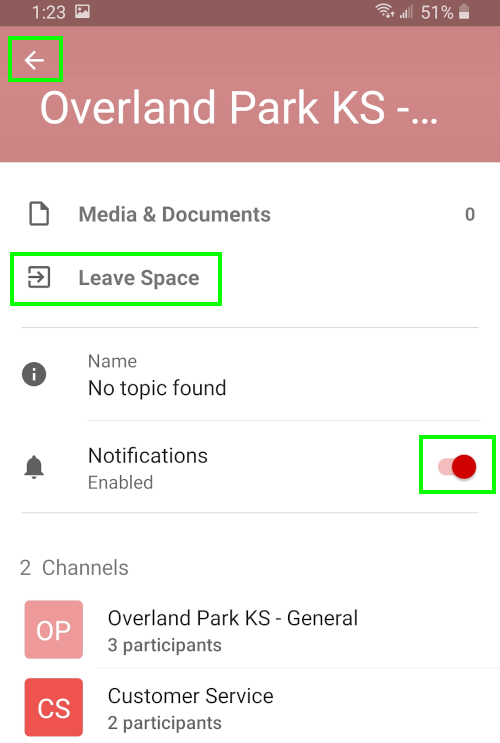 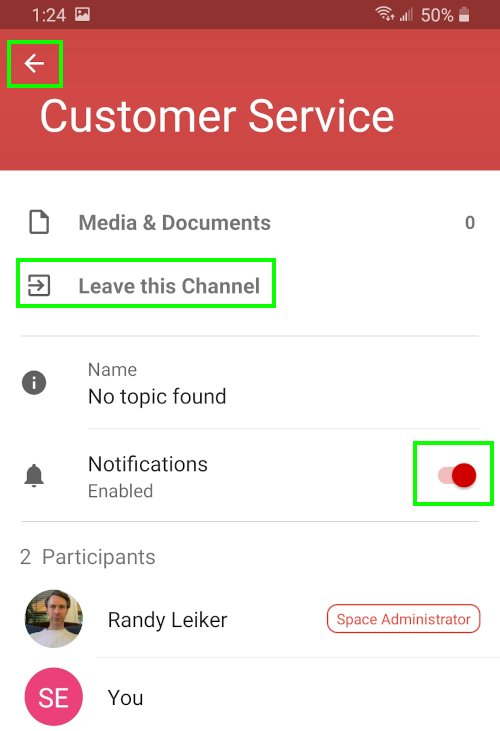 Tip.) You have the option to select a photo or image that will be used for yourself that others will see for both Instant Messaging conversations and video calls. To set this option, in the upper left corner of your screen, tap the hamburger menu, then in the menu that appears, tap the pencil icon. 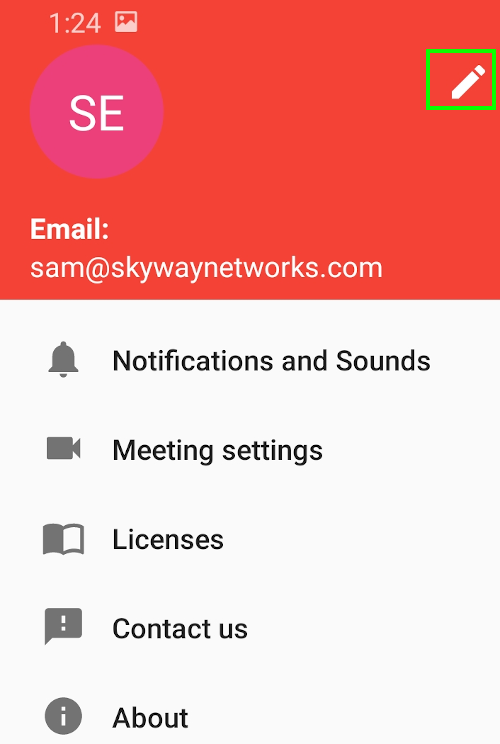 Next, tap on the circular icon that appears near the top center of your screen with a camera icon next to it. This will prompt you to select either an existing photo or image from your device, or to snap a new photo using your device's camera. When finished, tap the arrow in the upper left corner of the screen to return to the Team app. 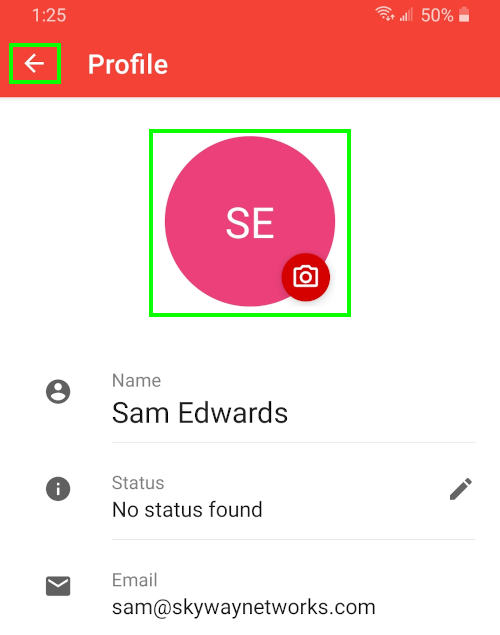